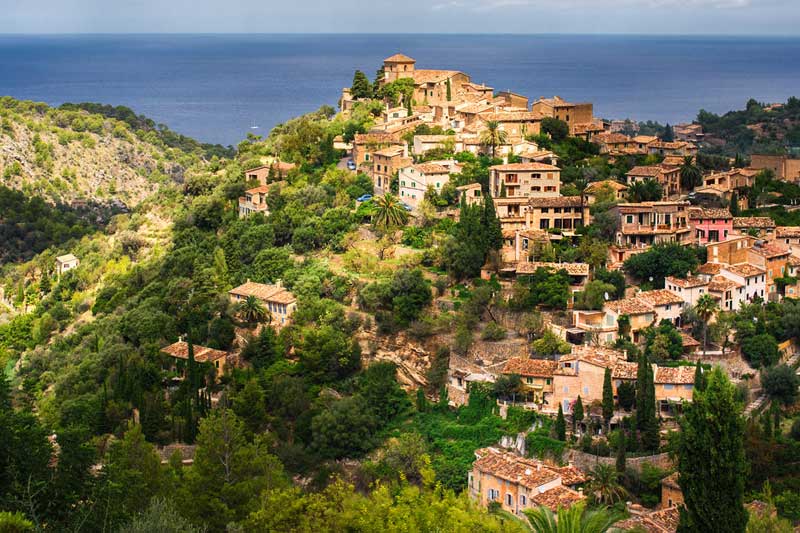 For cyclists, Mallorca has so much to offer – a warm year-round climate, roads in great condition and a variety of routes from mountain to coastal with breath-taking scenery around every corner. Throw in top hotels, world-class gastronomy and a swim in the sea at the end of the day and you’ve got yourself a fabulous cycling holiday!

Let’s shine a light on three of the best cycling routes in Mallorca to give you a taste of what to expect.

Starting in Alaró and finishing in Soller, this winding 37 km route takes you through the Serra de Tramuntana Mountain range – the backbone of Mallorca – stopping in peaceful villages where time seems unchanged. It’s a challenging ride with some intense climbs but it also shows you a rural, untouristy side to Mallorca where olive groves and orchards line your route, and the narrow streets of mountain villages are full of atmosphere.

Your ride will begin in Alaró, where you will gently ascend the Coll D’Orient into the Serra de Tramuntana until you reach Orient where you can reward yourself with a coffee at a café in this remote village surrounded by 14th century stone buildings.  The next section sees you climbing even higher, this time through a peaceful and shady forest which will keep you cool. Finally take on the hairpins of the Coll de Soller, with olive and almond trees lining the way and little traffic due to a tunnel that directs the vehicles through it. Admire the stunning view from the summit, then wind all the way down to the town of Soller with its pretty town and church and much needed refreshments.

Perhaps one of the most famous cycle rides in Mallorca and for good reason, this 19km route will stun you with its ocean panorama not to mention the sense of achievement for getting all the way to your target – the lighthouse on the tip of a peninsula, known as the most northerly point of Mallorca.

You will start your cycle ride with a bang, coming out of the town of Port de Pollença in the north of Mallorca with a sharp incline, but fear not, this will be the hardest climb of your cycle ride and the smooth, well-maintained tarmac roads are a joy to cycle on. Your payoff are spectacular coastal views all around from shimmering coves, cliffs and pine forests. There’s even a dramatic tunnel before some nippy hairpin bends leads you to the lighthouse itself, built in 1863 and shining like a beacon in alabaster white. What a ride! And even better, we can arrange transport to pick you up, so you only have to do the route one way – lunch at a beachside restaurant awaits.

One of the nicest ways to explore Mallorca is the southern coastal road which skirts around the Serra de Tramuntana with lots of small, hilly climbs without the sustained challenge of intense inclines. It’s also a very pretty area, with plenty of charming villages and dramatic views sandwiched between the Mediterranean Sea and the jagged peaks of the Galatzo mountain.

You’ll begin in Esporles, a 12th century village dominated by impressive stone architecture – the perfect place to savour a coffee before your ride. You will also pass through the picturesque village of Banyalbufar, clasped into the cliffside and known for its stepped terraces, created by the Moors in the 10th century. Continue towards Estallencs, which dates to the Middle Ages and is known for its picturesque port, and finish in Andratx, a traditional village with narrow streets and a 13th century church. Wander the art galleries and treat yourself to a cold drink, you deserve it.